Would you hire us??? Never mind, we'll do it for free! 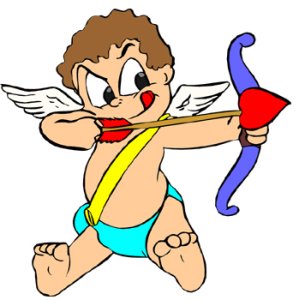 For as long as I can remember, I've enjoyed matchmaking.  My past record isn't so great... okay, I stink at it, but my luck is changing!  I've actually successfully connected a few couples in the last few months.  Remember that it's only my job to introduce/fix you up with someone who I believe would be compatible with you.  If you date a few weeks and then decide it's not going to work, that is not a strike against me.  If you share the same interests and find each other attractive, then I've done my part.  I can't go on dates with you and make it work out, people!
Danna and I share this little hobby, and together we make a great team.  It was actually Danna's idea to hook up Dan Morgan and Whitney Gibson a couple of months ago and it's been a LOVE MATCH for sure.  Danna was so excited when she called me to inform me of her GREAT idea.  I really didn't do anything except encourage Dan, which wasn't hard at all to do.  If we ever do start a company, it will be their picture  on the billboard for sure.  Aren't they cute??? 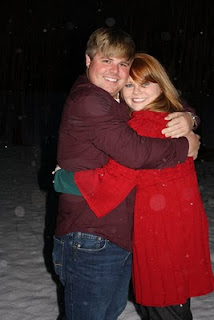 So, this brings me to the reason for this blog.  I have an idea that I wanted to run by you all.  If Danna and I did start a new business (hypothetically speaking, of course, since I don't have time to start a new business!), how do you think this one would go over...  We could call it "Creative Coincidences".  Basically, it works like this... Client (we'll call her Missy) comes to us because she has her eye on a certain guy.  He'd then become the Target (we'll call him Billy).  Missy has seen Billy around and likes what she sees.  She may even casually know him, but not well enough to engage in conversation.  Missy decides that she needs help getting Billy's attention.  Enter Danna and I... we scheme (or "creatively plan" as I prefer to call it) to put Missy and Billy in the same place at the same time.  Or we go undercover to investigate Billy to find out what he likes, so that Missy and suddenly become interested in the same things.  Or we disable Missy's car so that it breaks down in front of Billy's house, etc.  You get the picture.  Now, calm down, I know some of you may be freaking out.  You probably think this is stalking.  Just hush, it's not.

Or, in another scenario, we may actually know of two people who we think would make a cute couple.  For whatever reason, one or both of them may be resistant (ahem...cough cough... not calling any names!), but Danna and I really feel strongly that they need to give it a shot.  We could put our creative planning in action and arrange several random moments where their paths cross.  Since neither party asked for our services, we would have to do this pro bono, but that's okay.  After they got married, they might make a donation to our company or something.  We can work out all those details later. 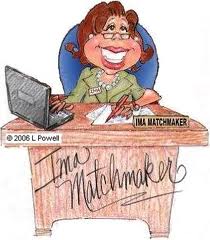 Posted by Amy Garnett at Thursday, December 30, 2010 No comments:

I knew this day would come.  I HOPED it wouldn't, but deep down I knew it would.  Having already gone through this age with two girls, I KNEW it would happen.  Yuri and Gigi played hair salon.  With. The. Real. Scissors.

They were supposed to be taking a nap, but I kept hearing giggles.  Like not typical giggles... weird giggles.  I went in to check on this and this is what I found... 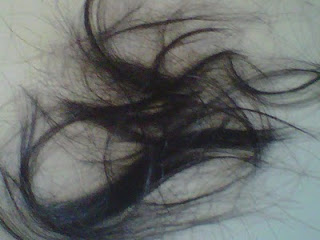 I got pretty hysterical, but Karlie (bless her heart!) was nearly beside herself.  If you know her, you know that little things going wrong tend to set her off.  The thought of her baby sisters with military-style haircuts could be considered one of those things.  She actually had me laughing, so Yuri and Gigi caught a break!

For the first half hour, Yuri and Gigi blamed each other.  Nobody would accept any responsibility at all.  Then, Gigi came upstairs, looked in the mirror and said "Ms. Hopey is a good haircutter.  Yuri is not a good haircutter".  I knew then that Yuri was the guilty party (which, I must admit, surprised me greatly).  I came down to Yuri's room and said "Look at me in the eyes.  Did you cut Gigi's hair?".  She didn't answered, but she dropped her head and wouldn't look at me.  That was close enough to an admission for me to convict!

Compared to the number Haley Rae did on her hair when she was 3, this wasn't just terrible.  When Yuri cut Gigi's, she must've been going for the Posh Spice look.  It actually turned out pretty stylish!  Hope told her to tuck one side and swing the other, so she's been walking around the house tonight saying "tuck... swing... tuck... swing" 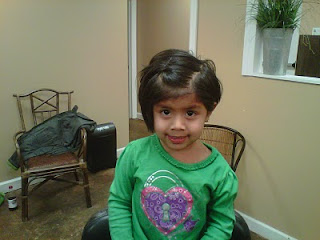 It is apparently harder to cut your OWN hair than someone else's because Yuri struggled with her own 'do.  She chopped layers ALL OVER HER HEAD.  We didn't have a choice but to stack it up, and it STILL has short layers that stick up.  She wasn't happy about any part of the situation, and hopefully it'll make her THINK next time before she gets crazy with the scissors. 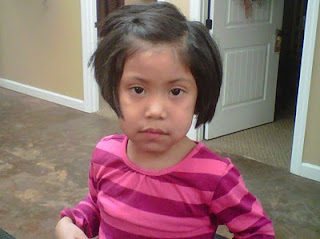 The funny thing is that I didn't recognize the scissors.  When I was telling Momar about it, she told me that she had been missing a pair of scissors since she wrapped presents on Christmas Eve... right before WE ARRIVED to open gifts.  The best we can figure out, the girls smuggled the scissors home with their gifts and were waiting for the perfect opportunity to play hair salon.

It all turned out fine.  Nobody got scalped and they still look like little girls.  And since Willard loves short hair, he's happy as a clam.

You know I can't stay mad at them anyway.  Look at these faces.  If they're not sweet, I don't know what is!!! 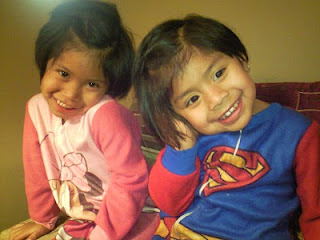 Posted by Amy Garnett at Tuesday, December 28, 2010 No comments:

Well, I've been basically homebound with sick kids since Saturday.  I've watched hours and hours of movies on ABC Family, which has actually been nice.  Since Karlie and Gigi preferred to be piled up on the couch, I just joined them.  Yeah, yeah, I know it would have been the perfect time to catch up on laundry or ironing or paperwork, but I just wasn't in the mood.  It was also the perfect time to read some paperbacks and watch funny Christmas movies!  We all need some downtime every now and then, and I've taken full advantage.  I'll admit I'm kinda stressed out because I have only bought about 25% of the Christmas gifts that I have to buy, and I have no idea when I'll get to shop, but.. whatever... no sense in worrying.  If I have to hit Wal-Mart in the middle of the night, so be it.  It's not like worrying is going to change anything.  I plan to have a Merry Christmas, sick or well, prepared or not prepared --- and I hope you do too!!! 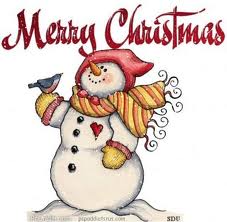 Posted by Amy Garnett at Tuesday, December 21, 2010 No comments: 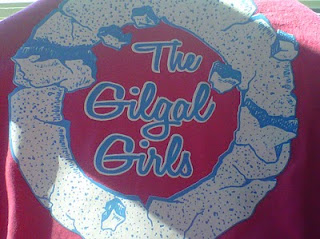 You may have seen several ladies in the community walking around in hot pink t-shirts with "The Gilgal Girls" emblazoned across the front.  My Sunday School class (lead by Susan Hensley) finished a Beth Moore bible study back during the summer.  One thing that stuck out for us was when she mentioned the word "Gilgal".  The literal meaning of the word is "circle of stones".  We got to discussing it, one thing lead to another, and we ultimately started referring to ourselves as "The Gilgal Girls".

It makes sense, really.  Stone is just another word for rock, and we truly are like a circle of rocks for each other.  When I was going through period of panic and heartbreak over the possibility of losing Yuri and Gigi, these were the women who listened and prayed and encouraged me.  They kept reminding me that God was in control, even when I tried my darnest to take matters into my own hands.  And when I was having a hard time with the idea of Hunter spending his summer as a missionary in Serbia, they reassured me that he would be fine.  Anytime someone in the class needs prayer, or if something happens in the community that we feel is important, we send out a mass text that always starts "Hey Gilgals...".  When we see those words, we know that a fellow Gilgal needs us.

If you're reading this and you don't have a church family, come join us at Danville Baptist.  Sunday school starts at 9 a.m. and preaching at 10:15.  You too can be a Gilgal Girl!!!
Posted by Amy Garnett at Saturday, December 18, 2010 No comments:

Ho-Ho has his work cut out for him!!

Yuri has asked for a kangaroo, a rollercoaster, and a gun.  Gigi has asked for an alligator, an elephant, a panda, a knife, a fly swatter, and a flashlight.  When I show them stuffed animals that look like the aforementioned items, they say "noooooo!  I want a REAL one!"  Sigh.

Gigi also has a fascination with Superman (or, as she calls him, "Hooperman").  She wants Santa to bring Hooperman to our house to play with her.  Nice, huh?  Well, lucky for her, I happen to know someone who will make a GREAT Superman.  He has (kind of) agreed to dress up and come by on Christmas morning to play with her.  Thank you, Will Edmondson!  You're going to look marvelous... cape, tights, boots... it's going to be AWESOME!!!!