Willard says I’ve been grumpy for a couple of days so I might as well use my blog to voice some things that annoy me.  These are in no particular order of how much they annoy me, by the way.  Just saying that so if you see yourself in one of the categories, you won’t think I’m any more annoyed by you than I am by anything else.

(1)    People who repost articles on Facebook that are obviously fake (and are outraged because they think it's true).  It’s called satire, folks.  It just means some poor soul who isn’t talented enough to be a real journalist is allowed to write garbage and publish it.  Take a minute and investigate the article before you share it to all of your FB friends.  Really.  It makes you look silly.  If you read something that is so absolutely unbelievably stupid that you just cannot imagine it being true, it’s probably not.  Unless, of course, it’s something dumb Obama has done…. That’s usually always true.

(3)    People who update their FB status or upload pictures dozens of times a day.  Nobody wants to see all that.  I know what you’re thinking….  The obvious thing would be to hide those people, right?  Well, I can’t, okay!?! It’s like a train wreck.  I want to look away, but I just can’t.  Now, don’t be texting me and asking if I’m talking about you. If you have any doubt, then I probably am.  If you’re posting more often than you’re going to the bathroom, that’s NOT NORMAL.  Moderation, people, moderation….

(4)    Alabama/Auburn fans.  I am totally a sports fan and I love a good competition, but sometimes this whole rivalry thing gets out of hand. It’s ugly, it’s petty, and it’s immature. I’m a Bama fan (duh!) but I’m talking to both sides.  Can’t we all just get along?

(5)    Mean girls. I blogged about this one time.  I know all us females have the Mean Girl gene (some have a more dominant gene than others), and it usually peaks in middle school.  If you’re over 14 and you still need to feel powerful by playing on the insecurities of others, then you have a problem.  It’s time to grow up.  You’re not cute.

(6)    I was going to say negative people, but given the subject of today's blog, that’s probably a bit hypocritical of me.  I’m not USUALLY this negative though, so I’ll say it.  If you don’t have anything positive to say… EVER… then you should probably figure out why.  Chances are, the problem is not the circumstances or the people around you… it’s probably YOU.  Stop blaming everybody else and fix yourself.

(8)    Common Core Math. Seriously sooooo annoying.  The majority of the people I know agree with me on this one.  A few of you don’t.  And that’s okay.  I understand the general concept of Common Core, but you will never in a million years convince me that this new way of learning math is a good idea.  Instead of Common Core, how about some common sense?

(9)    Alexander Shunnarah.  You know you agree with this this.  Gah, so annoying.

A Christmas tree in NOVEMBER???

I woke up yesterday morning (at 4:30… thanks, Aubree) and declared yesterday to be a day of rest. It started out quite nice.  I caught up on some of the stuff I had DVR’d and basically just relaxed.
Then, around 11 a.m., Karlie woke up and walked into the den….

Note –The earliest I have EVER put up a tree is December 9th.  The latest is December 18th.  It comes down approximately 30 minutes after the last present is opened on Christmas morning. I know, I know… you all hate me now.  I’m a terrible person… blah, blah.

We started by rearranging the den furniture, which is always risky.  Willard has serious OCD issues about things getting moved around, you know.  His recliner has been in the same spot for 20 years.  We had just gotten the furniture moved when he turned in the driveway.

Willard walks in the back door….
“WHOA! WHOA! WHOA!”

He complained and was so unsettled that he couldn’t even eat lunch at home, so he left to get lunch at the store. He never even CONSIDERED the idea that we were moving furniture to make room for a TREE.  He knows me as well as I know him, and the idea of me putting up a Christmas tree on November 28th was ludicrous.

Well, as ludicrous as it sounded, that’s exactly what happened.  Without too awful much trouble (except when I yelled out something about tree lights being straight from Satan), Karlie and the little girls helped me get the tree up in record time.

Once it was done, I remembered that I actually enjoy sitting around a lighted tree at night. 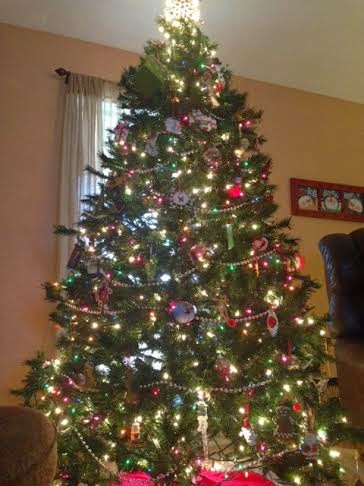 Now, I guess you've noticed, it's not the fanciest tree in the world.  It's not color coordinated and it sure wouldn't win any of those decorating contests that I see on Facebook.  It's a family tree.  Every ornament on it was either given to us, made by one of the kids, or has sentimental value.

This ornament is from 1988.  Momar got it engraved at Wal-Mart.  It hung on her tree for 2 years and then when we got married, she passed it on to us. 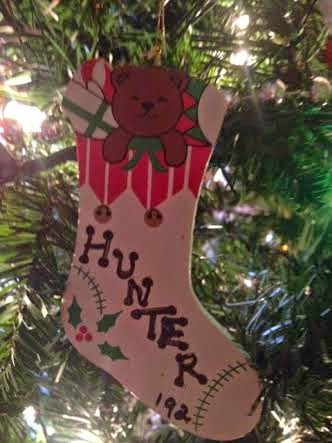 This is the ornament we got for Hunter on his first Christmas in 1992. 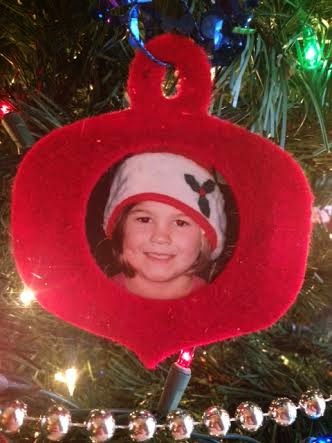 This is the ornament Karlie made for me in kindergarten. 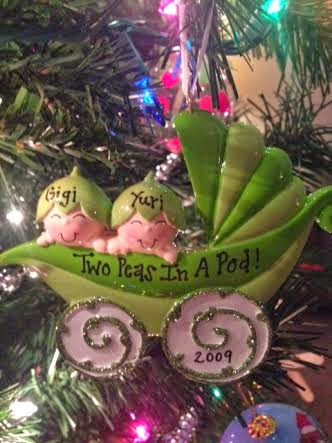 This one was given to us by my friend, Angie Blankenship....aka "the ornament lady".  It was our first Yuri/Gigi ornament. 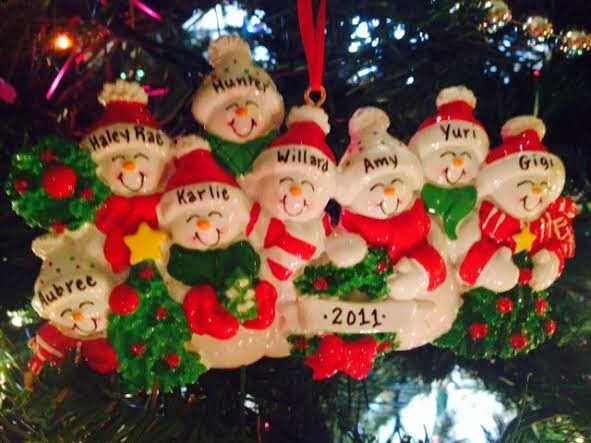 And here's the family ornament.  We got it in 2011, right after we got Aubree in foster care.  I really struggled with whether to choose an ornament with 5 kids or 6 kids.  At that point, we had no idea if we would have her a few months or forever.  Aubree wasn't her birth name but it was a close variation and we thought we might call her that.  So glad I included her on it.

DISCLAIMER: You might notice that there are no pictures of Haley Rae's first ornament or any of her homemade ornaments.  That's because when she was about 12 years old, she declared them all "lame" and destroyed them. Hard to imagine, I know.  But true story.

Am I glad I put our tree up in NOVEMBER and do I vow to make this a new tradition? Now let's don't get carried away.  So far, I'm enjoying it though.

Posted by Amy Garnett at Saturday, November 29, 2014 No comments:

I’m baaccck!  Sorry for the dry spell.  I had someone ask me last week if I stopped blogging because my life was no longer chaotic.  Uh, no.  That would not be an accurate statement.  It’s a crazy, crazy life – I kid you not – but it’s a different kind of crazy lately.  I'm doing some new stuff in addition to my family and my job.  It's a bit time consuming, but very fulfilling.  I'm going to blog all about it soon.

But back to the family life -

For the first time since Hunter was 6 years old, we have gone 5 months without anybody in our family playing an organized sport.  Karlie didn’t play volleyball this year, the little girls didn’t sign up for basketball.  We’ve actually been HOME in the evenings – what a concept!  The downside is that I have to cook every night.  The upside is that I can put kids in the tub at 6:30 and have them in bed by 7:30.  That’s working well for Yuri and Gigi.  We don’t even need to discuss Aubree’s sleeping habits.  There seriously needs to be scientific study done on that child.


Speaking of Aubree, she is totally addicted to “Peppa Pig”.  It’s a pretty cute cartoon….in moderation.  We basically watch it 24/7, though and it’s becoming unbearable for me.  The fact that Willard is beginning to speak with a British accent, Aubree is ending all her sentences with an “oink”, and calling me “Mommy Pig” tend to make me think we have a problem. 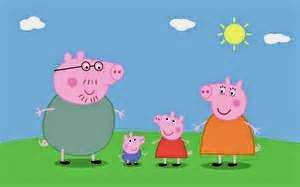 Posted by Amy Garnett at Thursday, November 20, 2014 No comments: