For the first time since I started this blog, I have a GUEST BLOGGER.

There have been several tributes in the last few days for my father-in-law, Charles Randolph.  His children, grandchildren, in-laws and friends have all paid written respect to him and they have all had the same theme.  Charles was the greatest father, grandfather, friend and neighbor that anyone could ask for.  I agree with every word that has been spoken or written about him.  I am going to give the son-in-law perspective.

I drove down County Line Road for the first time ever on February 14, 1986, to pick up his oldest daughter, Amy, for a date.  It was exactly one week before her 16th birthday.  The significance of that day did not register with me for about 24 years when my oldest daughter went on her first date.  He and I never talked about that day, but I imagine that he had been dreading it for a long time.  I am guessing that he immediately knew that this cocky, mullet-haired young man was not good enough for his daughter, and he had no idea what she saw in him or why she would want to be seen in public with him.  I immediately had a fearful respect for him.  He never threatened me, but I knew that I had better treat his daughter properly.

Obviously, that was not my only trip down County Line Road.  Amy and I dated 4 ½ years and then got married.  During our dating years, I helped Charles on the farm several times.  I was in my late teens and in a lot better shape than I am now, but I was in no shape to begin to keep up with Charles.  If you held a gun to me and said you were going to shoot me if I didn’t match his work level for a day, I would tell you to go ahead and pull the trigger.  There would be no need for me to expend my energy and then be shot after I failed.  I have known a lot of hardworking men, but Charles was the hardest working man I ever met.  He taught me that you do whatever it takes to provide for your family.  Charles loved to work, especially on anything associated with farming.  In the beginning, he worked hard because he had to.  In later years, he worked hard because he wanted to.  I never heard him fuss about how much money Momar spent on kids or grandkids.  Granted, he never knew just how much Momar spent on kids and grandkids, but no amount was too great.  There was literally nothing he would not do for his family.

My position in Charles’ legacy was secured on July 7, 1992.  That is the day Hunter was born.  Hunter was the first grandchild and the fact that he was a boy, after having only daughters, made him even more grand.  Since then, his daughters and son-in-laws have given him 10 more grandchildren and he has made each one of them feel like they are the greatest being ever to be born.  Three of mine and Amy’s children are adopted, but in Charles’ eyes they were HIS grandchildren exactly the same as the other eight.

From watching Charles over the last 30 years, I have learned how to be a father.  I will never reach the bar he set, but he showed me how it is supposed to be done.  I have never had to worry about failure.  I knew as the caretaker of his daughter and grandchildren, Charles would always be there to pick me up if I stumbled.  I have heard many stories in the last few days about Charles helping friends and neighbors when they were in need.  If he was willing to help friends, you can imagine how willing he was to help family.

Charles never once tried to tell me what to do.  He never got involved in mine and Amy’s personal business.  When I had enough sense to seek his advice, he always gave me sound direction.  I’m sure that after seeing some things I’ve done, he thought to himself – if that moron would have asked me, I could have told him that was a mistake.

I have asked Amy to get me a pair of Charles’ shoes.  I don’t intend to ever put them on my feet.  I just want a visible reminder of the fact that I will never be man enough to fill his shoes, but when it comes to my family it’s my job to try.

I could add many details about Charles and his life, but as I sit here and think about him, the most profound thing I can say is, “I am a better person for having known Charles Randolph”. 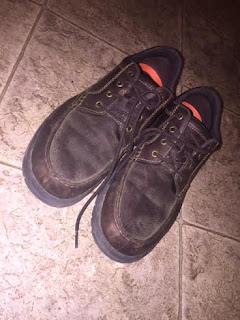