On Monday morning before last (the Monday BEFORE the Daytona 500), I stopped at the store for gas.  I got gas, got breakfast for me and Aubree, a couple of drinks, a pack of gum… and my total was $88.88.  My first thought –


Yay!  Maybe this is a sign that Dale Jr. will win this week.


Unless you live under a rock, you’ve undoubtedly heard that Dale Jr. DID INDEED win the Daytona 500.


This past Monday morning (the Monday AFTER the Daytona 500), I dropped  Aubree off at daycare and picked up the receipt that shows my balance or credit at daycare.  Folks, I had a credit of $88.
BAM.


Let me just put it out there... Dale Jr. WILL win this weekend at Phoenix. 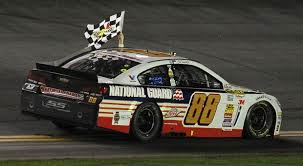 I Heart My Community

Back in August, DHR placed a 16-year-old girl and her 4-month-old baby with us.  It was supposed to be for a day, but then it got extended for a week.  After a week, things were going well and we agreed to be their permanent foster home.  Ultimately, they were with us until last Friday, before moving back home.


(I can’t use their names because of DHR rules, so that’s why I refer to them as “the girl” and “the baby”.  I’m not trying to sound detached, it’s just a rule.)


The girl had not been in school in a couple of years and when DHR told her she had to enroll at Danville, she was NOT excited.  She assumed she’d stand out as the new girl and be shunned because she has a baby.  Well, she was right about part of it.  She stood out, alright.  The teachers all took her under their wings… the kids included her like she had always been there.  She went into school that first day expecting to have to fight anyone who made an ugly comment about her being a teen mom.  Instead, they asked to see baby pictures and couldn’t wait for her to bring him to the school to visit.  She went to volleyball games, football games, basketball games… I remember looking down at her during a volleyball game and seeing her cheering as loud as anybody in the whole gym.


The first Sunday I told her she had to go to church with us, she wasn’t too happy about that either.  Again, she expected to be looked down upon and she told me right away that she didn’t want to leave her baby in the nursery with strangers.  It didn’t take long for her to see that those strangers treated her baby like a prized possession. She was prayed for more than she can even imagine, and the ladies at church even bought diapers for me to send back home with her so she didn’t have to worry about buying them.


When I told her I needed the baby to go to daycare a couple of days a week with Aubree while I worked, she nearly freaked.  She was adamantly opposed to daycare.  Now, after 5 months, she wishes she could keep him going to Sheila’s Daycare because it’s so obvious how much they love him.  Miss Sheila couldn’t even talk about him leaving foster care and going back home without tearing up.

I know the past 5 months were not easy for this young girl.  She was forced to adjust to a different way of life.  A lot of teens would have rebelled against all our rules, but not her.  She loves her baby and she knew the best thing she could do for him was make the best of this situation.  It turned out good for her, but a lot of that is because she felt so accepted here.


So, to my friends … to the teachers at Danville… the folks at Danville Baptist… the daycare workers at Sheila’s…. THANK YOU!  You made a difference in the lives of two special people.  You helped make a good experience out of something that could have been really, really bad. What could have been the longest 5 months of their lives (and mine!) resulted in a beautiful thing.  They’re bonded to us now.  They’ll always have a connection to our family and to our community.


I’ve always been proud to be from my hometown of Danville, Alabama, but never more than now.

Posted by Amy Garnett at Tuesday, February 04, 2014 No comments: